On March 16, People’s Liberation Army (PLA) Air Force aircraft conducted a set of unusual nighttime sorties over the sea to the southwest of Taiwan. At least one KJ-500 airborne early warning and control (AEWC) aircraft and an undisclosed number of J-11 FLANKER-L jet fighters participated in the mission, and at one point crossed the median line of the Taiwan Strait, which prompted a scramble by Republic of China Air Force (ROCAF) F-16 fighters in response (Focus Taiwan, March 17; Taipei Times, March 18). Although the nature of the mission was unusual—this marked the first time that PLA aircraft flew in the vicinity of Taiwan at night—the incident was otherwise consistent with a pattern of increasingly provocative naval and military aviation operations conducted in the vicinity of Taiwan by PLA units in the first quarter of 2020.

This uptick in tactical military activity has been accompanied by more assertive rhetoric from People’s Republic of China (PRC) media outlets and spokespersons since the landslide reelection of Taiwan President Tsai Ing-Wen (蔡英文) on January 11 (China Brief, January 17). These military operations (see further discussion below) have also taken place as PRC officials and citizens have scrambled to cope with the social, economic, and political impacts of the COVID-19 pandemic that first manifested in the central Chinese city of Wuhan in December (Jamestown, ongoing). This suggests that senior Chinese Communist Party (CCP) officials wish to project the message that the crisis has not inhibited the PLA’s capabilities to defeat Taiwan “separatism”—and may further wish to use such operations to assert an image of strength in the face of the internal crisis produced by the pandemic.

Background: PLA Aviation Operations Near Taiwan Prior to 2020

PLA Air Force (PLAAF) flights around Taiwan are not a new phenomenon, and PLAAF sorties to circumnavigate the island—frequently involving H-6K bomber aircraft flying through the Bashi Channel (巴士海峽, Bashi Haixia) south of Taiwan, with other aircraft acting in support or escort roles—have been conducted since November 2016. In certain periods, such as the summer of 2017, these sorties peaked significantly. [1] These flights serve a two-fold purpose: they provide training for aircrews in conducting longer-distance sorties in likely operating areas for a potential future conflict over Taiwan; and they also serve a propaganda role, with both real and notional “island encirclement” sorties promoted in state media as part of a psychological warfare campaign intended to intimidate residents of Taiwan. [2]

On March 31, 2019 two PLAAF J-11 fighters crossed the median line of the Taiwan Strait (an unofficial boundary, but one traditionally observed by military aircraft from each side), the first such reported incident since 2011. This prompted a scramble by ROCAF fighters and a sharp response from Taiwan President Tsai Ing-Wen (蔡英文), who vowed the “forceful expulsion” of PLA aircraft repeating this action in the future (SCMP, April 1, 2019).

The end of 2019 saw another significant development for naval aviation in the region, when the PLA Navy (PLAN)’s first indigenously-designed carrier SHANDONG (山东舰) (CV-17) was commissioned in mid-December 2019 at Sanya Naval Base on the southern Chinese island province of Hainan (Xinhua, December 17, 2019; Japan Times, December 18, 2019). On December 26, SHANDONG sailed through the Taiwan Strait in the course of conducting local-area training and sea trials (USNI, December 26, 2019). The transit was of limited importance in terms of demonstrating operational proficiency, but it was a symbolically powerful statement of the PRC’s growing naval strength and assertiveness towards Taiwan. 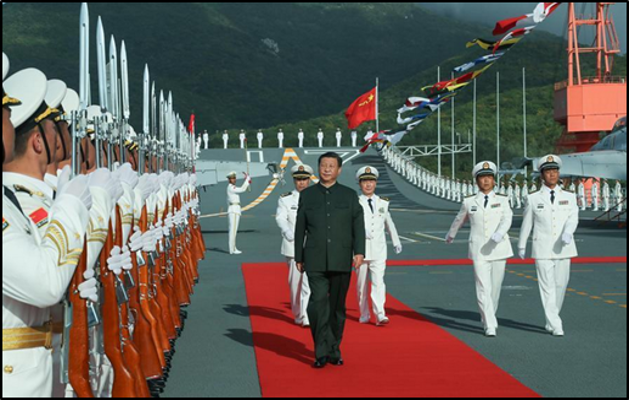 Image: Xi Jinping, in his role as Chairman of the CCP Central Military Commission, reviews an honor guard as part of commissioning ceremonies for the PLA Navy aircraft carrier SHANDONG held at the Sanya Naval Base on Hainan Island, Dec. 17, 2019. (Source: Xinhua)

The pace of military incidents involving both U.S. Navy / Air Force and PLAN / PLAAF platforms has picked up in the first three months of 2020 (see chart below). These events have also been accompanied by at least three significant political events:

Noteworthy U.S. and PRC military actions in the vicinity of Taiwan in the first quarter of 2020 are provided in the chart below:
Click here to see the chart.

PLA naval and aviation operations in the vicinity of Taiwan are an ongoing phenomenon, and may be expected to further increase commensurate to the PRC’s growing military power. These activities ebb and flow on a regular basis, and too much could be made of looking for broader significance at particular times. That said, such tactical activity does appear to have been on the rise in the first quarter of this year. Furthermore, it has been accompanied by increasingly strident rhetoric from the PRC, which is insisting on its claimed sovereignty over Taiwan in an ever-more assertive fashion—even as democratic political processes in Taiwan are leading the island away from the PRC’s orbit, and making the prospects for peaceful unification on Beijing’s terms more remote than ever.

These actions have also been paralleled by an increase in maritime presence and freedom of navigation operations conducted by the U.S. Navy and U.S. Air Force in the vicinity of Taiwan and the South China Sea. In a proverbial case of the lady protesting too much, PRC state press has accused the U.S. government of conducting military provocations in order to distract from failings surrounding the ongoing viral pandemic: as stated by the nationalistic Global Times on March 22, “The current U.S. administration wants to shift attention from its failure in containing COVID-19 and the plummeting stock market, so it is increasing efforts to escalate tension… China hawks believe that such actions during the crucial period of the COVID-19 outbreak can shift Americans’ attention by inciting nationalist sentiment” (Global Times, March 22).

The combination of its own rising military capabilities, and the need to project an image of strength amid the domestic social and political crisis sparked by the COVID-19 pandemic, have led Beijing to ramp up provocative military measures aimed at sending a political message to both Taiwan and the United States. If domestic woes continue this year—as, for example, in a serious economic downturn—Beijing’s saber-rattling across the Taiwan Strait may be expected to continue further into 2020.

John Dotson is the editor of China Brief. For any comments, queries, or submissions, feel free to reach out to him at: cbeditor@jamestown.org.

[2] For discussion of how PRC state media has promoted these flights for propaganda purposes, see: ibid., pp. 22-23. For an example of how notional PLAAF flights have also been used in propaganda directed at Taiwan, see: John Dotson, “Beijing Sends a Menacing Message in Its Lunar New Year Greeting to Taiwan,” China Brief, February 15, 2019. https://jamestown.org/program/beijing-sends-a-menacing-message-in-its-lunar-new-year-greeting-to-taiwan/.